The thyroid gland sits at the base of your neck and is responsible for the production of hormones that help to regulate your metabolism. Hashimoto’s Thyroiditis, or Hashimoto’s Disease, is an autoimmune disorder characterized by the body attacking its own thyroid tissue. The result is hypothyroidism, or low functioning thyroid, which not only slows down your metabolism, but can have downstream negative implications on your brain, gut, and heart. 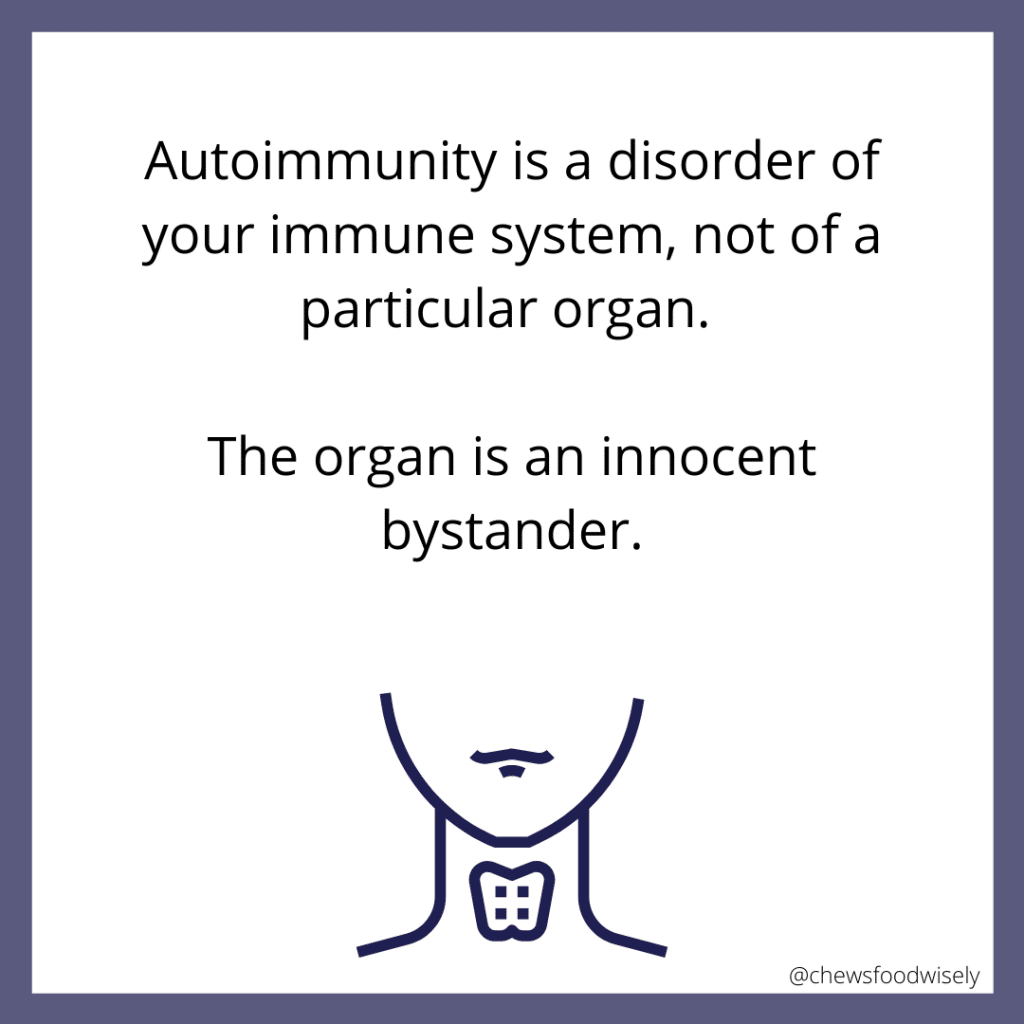 Hashimoto’s Thyroiditis is the most common cause of hypothyroid among women in America and is 7 times more common in women than in men. This can be identified on a full thyroid panel by looking to see if thyroid antibodies are present. Typical dietary management here include elimination of gluten and other food sensitivities, repletion of nutrients that play a role in thyroid hormone production, and controlling the overactive immune system.

In Functional Medicine, it is believed that the development of chronic conditions, such as autoimmunity, begin in the gut. While you may have a genetic predisposition to something, which is like having a loaded gun, whether or not you pull the trigger of that genetic gun depends largely upon lifestyle factors (toxin exposure, stress, food choices) as well as the level of gut permeability (or “Leaky Gut”) you may have. We can’t change your genetics, but together we can manage your diet, lifestyle, and gut integrity to manage your autoimmune disease!

An autoimmune reaction can be occurring long before it is reflected in a high TSH value and it is important to catch the imbalance before too much tissue destruction has occurred. Common medical logic is that if autoimmunity is an issue, your thyroid will eventually be subject to enough destruction due to your body’s production of antibodies against its own tissue that TSH levels will elevate. So, only TSH is evaluated and not other important areas of thyroid function. Then, typically, thyroid hormone replacement is prescribed without addressing root cause of the dysfunction– autoimmunity.

You can have very high antibodies with normal TSH levels.

Symptoms of Low Thyroid Include:

What are the Suggested Lab Tests?

Apply to Work Together!