TSH is one piece of the thyroid puzzle!

Ah, the thyroid. Such a little gland with such a big impact on our bodies! The thyroid sits at the base of the neck and produces thyroid hormones that play a crucial role in the regulation of metabolism (plus several other metabolic processes… don’t worry, we’ll get there!). Thyroid hormones are involved in every single cell in the body. For as important as it is, the thyroid sure can be temperamental, huh?

So why is thyroid disease so common?

I’m so glad you asked!

Let’s begin with a basic overview of the thyroid to understand how it works so that we can further dissect why it became dysregulated in the first place.

Meet Your Thyroid— the queen bee of your bod.

She is small, but she sure is mighty— and if you have thyroid issues you know this first hand. The little thyroid of yours is busy doing a lot, including masterminding your metabolism, regulating your sleep/wake cycle, puppeteering your sex hormones, controlling your heart rate and muscle contractions, regulating your menstrual cycle, body temperature, and even your immune system. With this lofty list, it’s easy to see why “just having hypothyroidism” isn’t just having hypothyroidism!

Fun fact: thyroid hormone is the ONLY hormone directly involved in EVERY. SINGLE. CELL. It’s a pretty big deal, eh?

The thyroid gland sits on the base of the neck in front of the trachea and is shaped like a butterfly. It produces hormones that are necessary to the body to maintain metabolism and support normal hormonal fluctuations.  Thyroid hormones include: thyroxine (T4), triiodothyronine (T3), T2, T1, and Reverse T3.

The thyroid takes iodine that we get from foods and combines it with an amino acid, tyrosine, to make thyroid hormones.  These hormones control our metabolism, growth, repair, and general development in the body.

When levels of circulating thyroid hormone are too low in the body, the hypothalamus secretes Thyrotropin Releasing Hormones (TRH) which then tells  the pituitary gland (a portion of the brain that acts like a thermostat), to secrete Thyroid Stimulating Hormone (TSH), which tells the thyroid to secrete more thyroid hormone.  It is a built in feedback signal to prevent the body from getting deprived of thyroid hormones.

Technically speaking, TSH is a brain hormone and not a thyroid hormone! 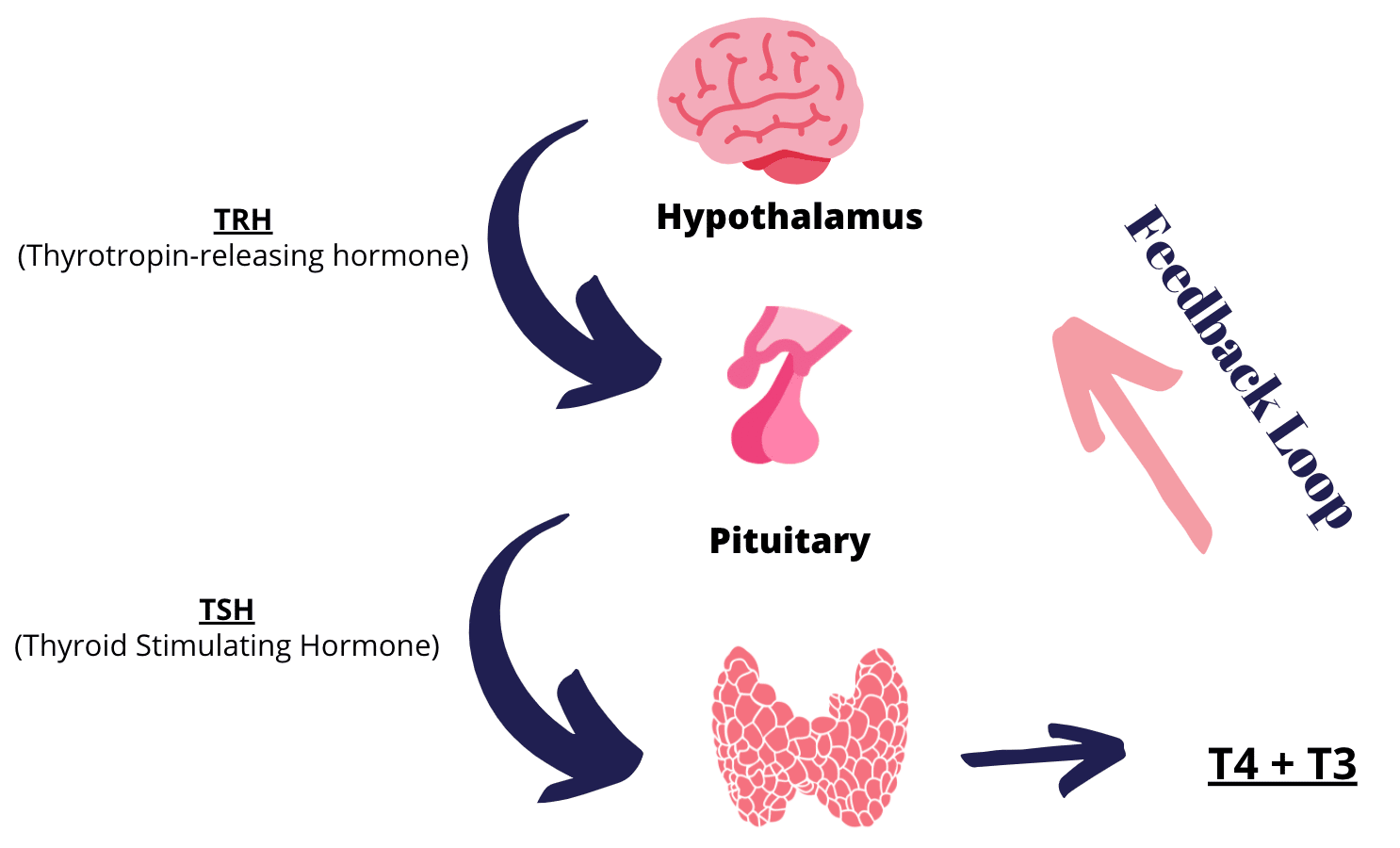 Symptoms of Low Thyroid include:

The root cause(s) of hypothyroidism can first be split into two major groups:

– Cellular resistance to thyroid hormone (thyroid hormone being produced, but either not converting to “active” form and or not being used by cells the right way)

It is important to determine the root cause of your hypothyroidism so that you can best manage it. While the medication intervention may be consistent regardless of the etiology, the nutritional and lifestyle management do differ depending on the root cause. For example, let’s say your root cause of hypothyroidism is autoimmunity. If there isn’t a plan in place to manage your autoimmune disease, then the destruction of your thyroid will continue. Medications help to replace the lost thyroid hormone, but don’t stop the disease progression.

Additionally, let’s say that you have cellular resistance to thyroid hormone. Taking more medication may not help as much as you would hope for if the hormone isn’t getting INTO your cells. The goal of nutritional therapy is to get your body to a place where it is more responsive to your medications and allows for the most optimal functioning of your thyroid (which varies from person to person depending on their disease progression!).

With all this information, you can see why assessing just “TSH” is not enough!

Ask for a Full Thyroid Panel to Get the Full Picture!

A Comprehensive Thyroid Panel (Should) Include:

Me too! CFW now is totally online!

Please reach out to schedule your socially distant consult!

Got It! Tell Me More!